NO SOUP FOR YOU! 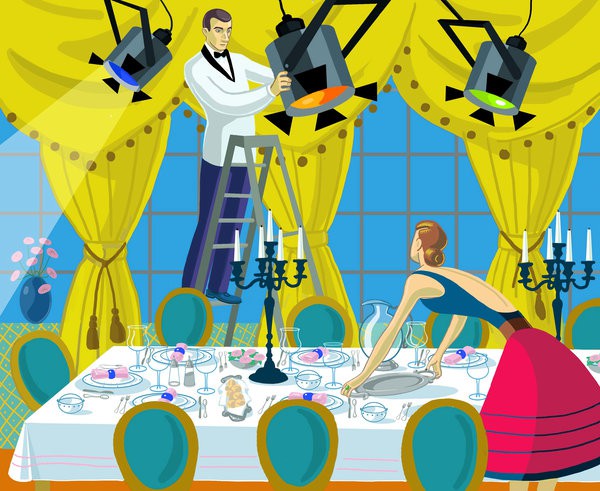 Not long ago, The New York Times’s much-vaunted Fashion & Style section — that soi-disant arbiter of the beau monde — declared the extinction of the New York dinner party; its headline tauntingly entitled, Guess Who Isn’t Coming to Dinner.

Guess what? They are coming, at least to my dinners. I’ve three teeming guest books that speak to 20-plus years’ of fantastic evenings chez nous! A proper dinner party requires generosity, foremost. And not of the pocket. One can have eight to a seated supper on $50. But it necessitates a generosity of time and an attention to detail, expending effort days before to polish silver and iron linens (neither is a picnic without a maid), and to clean the apartment (the only time it gets cleaned) and then fragrance it: popping down to Zitomer for the usual blue Rigaud candles that the Carlyle uses in the Gallery (Red Room); or heading to the Davidoff shop for the Charleston oil to fill the Lampe Berger.

Dinner at 8 means dinner is served at 9, probably 9:30. Serve comfort food and limit individual courses and plating unless one has help. Everyone brings a bottle of wine. Have two or three standard guests on hand — stalwart friends, whom you know to be gracious minglers — to engage those who’ve been invited for the first time and are apt to plop down and never budge. The music must never intrude on the din of conversation but be kept at a decibel level of instant recognition. Yes, even the most zealous non-smokers ask for cigarettes, so buy the generic brand and put them on the side tables. Keep ashtrays everywhere; emptying them frequently allows the host to circulate. Serve one round of cocktails, then move to wine, and don’t let your guests get too sauced before supper. Subtly alert each guest which setting his/her goblet came from, so that when you adjourn to table you won’t have eight befuddled drunks trying to determine where they’re seated. Dispense with the boy-girl seating etiquette (that’s a rather pedestrian rule like not wearing white after Labor Day): instead, seat your guests according to what they have in common, and make that clear to them to get the ball rolling. Seated at the head, the host must look about regularly during dinner to see who’s quietly pushing peas, and rush to engage them with some flattering tidbit for the others to turn their attention toward. Consider this gesture something akin to social CPR; and a thoughtful guest list should preclude this from ever happening.

After supper, repair to the living room for dessert/brandy/port. Unless they ask for coffee/espresso, it is not on the menu. Suggest instead they open the sterling Dunhill cigarette box for a more holistic digestif: fresh, abundant marijuana, and lots of accoutrements with which to smoke it (discreet pipes and one-hitters only; rolling papers are déclassé). Pour more wine. Lots more wine. Those with jobs or children are likely to leave early after midnight. Fine. Bid them farewell, politely, but first make certain they sign the guest book. Keep the wine flowing for the stragglers, and then turn up the music and dance!