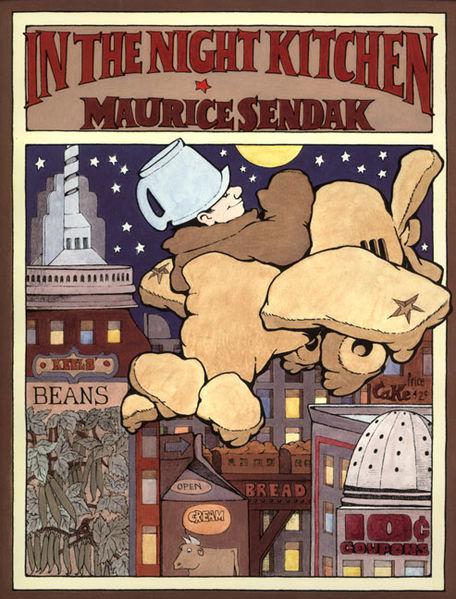 Maurice Sendak’s death left a gaping hole in my heart: his books were among the first I remember with sentient and sentimental appreciation, published at a time when he was still building the reputation for which he would be lionized, receiving numerous awards and citation-honors — the Caldecott and Laura Ingalls Wilder Medals, among them — for the genre of children’s literature he reinvented. I read “Where the Wild Things Are” when it was first issued in paper; but it was his “In the Night Kitchen,” published in 1970, which I received — hot off the press — in cloth, from Scholastic, purveyors, back in the day, of mail-order books through one’s local school district, that left me most rhapsodized. I remember, too, its trim size, more vertical than the horizontal heft of its predecessor, and more so resembling the books of my parents; in gleeful contrast to the oversize design so characteristic of children's books, a pejorative association to my eight-year-old self yearning to be a grown-up.

“In the Night Kitchen,” the tale of a Mickey’s nocturnal journey through a kitchen bakery — where he assists in making a cake after almost becoming one himself when he drops into the batter of this milieu — has always borne its share of controversy, not least for Mickey's unabashed nudity, anatomy in plain view, despite the all-around visual resemblance of the book to Little Nemo, whom Sendak had often cited as a general influence on the books he wrote and illustrated. Apparently, Little Nemo never disrobed. But Mickey does with glorious abandon when he floats amiably from his bed and into the custody of the bakers, all of whom look just like Oliver Hardy, of the comic duo whose films were another staple of my youth. I don’t recall having any kind of visceral objection to his naked state; or any reaction at all. After all, I looked quite the same in my birthday suit. I daresay I was more intrigued with what I’d intuited was his apparent insomnia — an affliction I always suffered but had no idea befell other kids too — even as Mickey, so the story goes, is sleeping soundly when he’s awakened by a noise and finds himself uprooted from his bed, divested of his PJs and blissfully sent aloft. But among what I loved most about this book was Sendak’s style of illustration, a kind of trippy surrealism that I’d begun to divine was very much the vogue in 1970.

And everywhere it appeared, this phase of graphical and animated psychedelia, so contrarily benign, given the illustrated effects of the hallucinogenic drugs from which it sprang. I was enthralled by what seemed a more sophisticated use of cartooning than the customary elements that comprised comic strips and most TV animation of the day, the tropes of typical kids’ fare. Madison Avenue was not immune to this kaleidoscopic fashion either: whether employed in adverts for Life Savers, Wyler’s powdered-drink mixes or Levi's, among other brands. One of the most effective campaigns ever -- now the stuff of advertising legend — was created for 7Up by J. Walter Thompson, which positioned this fizzy drink as the Uncola: an attempt to court the youth demographic with lemon-lime flavor against the cola-war dominance of Coke and Pepsi, which, it was further asserted, represented the Establishment. Coca-Cola would later counter that it was The Real Thing, and the Pepsi Generation would add that it had A Lot to Live, a Lot to Give. These were free-spirited times, to be sure, an age of us versus them; and Maurice Sendak, whose social criticism was neatly tucked into everything he wrote, understood that unremittingly.

In contrast to the cross-hatching style of illustration for which his previous book, “Where the Wild Things Are,” was widely noted, “In the Night Kitchen” bore a striking similarity to this distilled aesthetic of psychedelia — made famous by Peter Max, of course, and, among others, Heinz Edelmann, who provided the art direction on the Beatles’ “Yellow Submarine.” It was a time of unrest and experimentation and wonder; only the summer before we had landed on the Moon. This Age of Aquarius was, for me, a template of euphoria and a feeling that the best was yet to come. Gladdened by my own so-thought perspicacity, I was, as they used to say, feelin’ groovy.