JUDGING A MAGAZINE BY ITS COVER 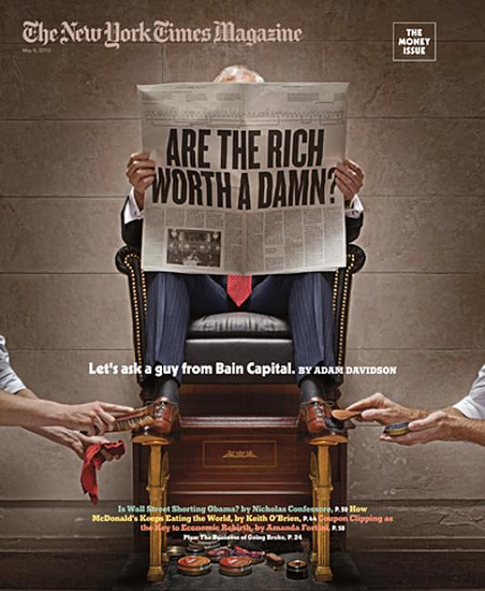 I had a most delightful reunion with an old friend when the Times Magazine debuted a new face to its family of typography, those extant fonts exclusively finessed for the Times by the great British type designer and MacArthur Foundation Fellow Matthew Carter, who was commissioned to refine this face for the pleasure of the Old Gray Lady, just as he has the with numerous others deployed in their pages.

I saw this old pal first on the cover, where, to my sheer joy, I recognized its jovial entry, always there to add a pronounced sense of mirth to the proceedings. I first met this chum in the middle 1970s, when CBS used it for a good deal of their advertising (much of it in the Times, too), the kind that all three TV networks once ran daily, back when they were still the dominant fare in home entertainment. If you don’t already know this font, it’s my sincere pleasure to introduce you to ITC Kabel Pro Black, the chubby variant and Good Time Charlie, shall we say, in a family of lithe and leggy types with august Nouveau and Deco origins, dating to 1927, when the great designer, Rudolf Koch, introduced this typeface, while still in the employ of the Klingspor Foundry, in Nuremberg, then one of the great centers of printing. If you aren’t the kind who appreciates underlined words disrupting your read — those seemingly tacit requests to jump to another page — allow me, please, to identify ITC Kabel Pro Black for you, directing you to the second image above.

But first, let’s question why the Times would have seen fit to match the byline of Adam Davidson, sheathed in Mr Carter’s version of Stymie — known as a slab font for its utility as a headline type — with this jovial debutante? Tandem heft alone is not why Stymie seems to live up to its name. No, I’m not sight-challenged, I can see the serifs of Stymie that are meant to complement what ITC Kabel Pro Black hasn’t got; but these fonts simply don’t work together, each wrangling for the supremacy of the marquee, their corpulent audacity a boxing match between heavyweights. Which renders for us something of an ironic metaphor here, given the opportunity the Times had to pair ITC Kabel Ultra with the more appropriate face, the one used in the prop newspaper headline: Hoefler & Co’s elegantly versatile Knockout, seen on the cover in its No. 67 Full Bantamweight version (third image above).

This disparity in weight would have trumped the convention of pairing serifs with sans-serifs, especially since a reduced point size for Knockout would have stood out handsomely. Alas, not so the stocky Stymie. But, of course, the really smart solution would have been to pair ITC Kabel Pro Black with one of its cousins; in fact, the slimmer ITC Kabel Demi, known to many as the face of L’eggs Pantyhose (fourth image above), would have done the trick nicely. But this was not to be. This debutante’s cotillion was — yes — stymied.

Now, lest you think such a festive reunion would have left me deflated after Stymie’s officious interference, something of a post-cotillion after-party was awaiting me on the Contents page of the Times Magazine. There, ITC Kabel Pro Black went into high gear, doing what it does best: serving as a display font for a run-on of letters and sentences, spacing tight, kerning tighter, just as CBS once engaged it, when, to highlight the strength of their comedies, they ran a full-page ad in the Times, that simply read: